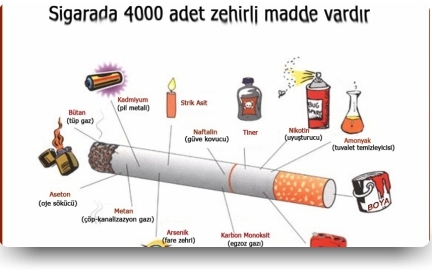 The nicotine, found in cigarettesi, is a stimulant. Twenty seconds after taking a breath from a cigarette, the nicotine first goes to the lung, then to the blood, then to the brain and other organs. Nicotine molecules are bound to acetyl-choline receptors in nerve cells. Nicotinine induces dopamin release from the vesicles by way of the signals origating from cell nucleus. Brain, secretes dopamin as a physiologic function during the activites such as listening to music, doing sports, praying, etc. providing the individual enjoy his life. When addictive substances such as cigarettes are used, the brain stops naturally dopamine production. The person feels well due to the release of more dopamine under the influence of the substance used. He says, "Oh, it's a good life." When not smoking, the person feels bad due to lack of dopamine, wants to smoke.

During withdrawal syndrome; that is when smoking is not done, nicotine molecules do not go to brain and the dopamine release is reduced accordingly. Person is induced with smoking will. Nicotine wastes accumulate in the brain fat tissue. These wastes were seen in blood slowly and they create a feeling of smoking although not really. Nicotinic substance knowledge is stored in DNA data bank. The person becomes addicted to smoking due to the above reasons

* giving nicotine to the body with applications such as tape, gum, tablet, nose sprey.

Even if these methods give positive results during treatment, they will not help to give up smoking because they do not remove the causes of addiction.

HOW SHOULD BE THE METHOD OF GIVİNG UP SMOKING?

* The addict should be free in smoking during treatment.

• In the first step, the effect of nicotine on the brain should be prevented.

• In the second step, nicotine residues accumulated in fatty tissues should be removed from the body.

• In the third stage, nicotine substance information should be deleted from the DNA database.

• Ultimately, the person should get rid of the cigarette addiction in a reasonable time. • After treatment, the person's smoking will should be killed..

• The person should feel himself like he has never smoked.

LEGAL WARNING: The information contained in this WEB site is intended for informational purposes only and is not intended to be a health service.The information given should not be used for diagnostic or therapeutic purposes in any way.Because the diagnosis and treatment process differs for each patient. For this reason, it is a very serious operation that must be done by a doctor.Please consult your doctor for any diseases or other problems that require treatment.